A Sad Day for the Alex Haley Family 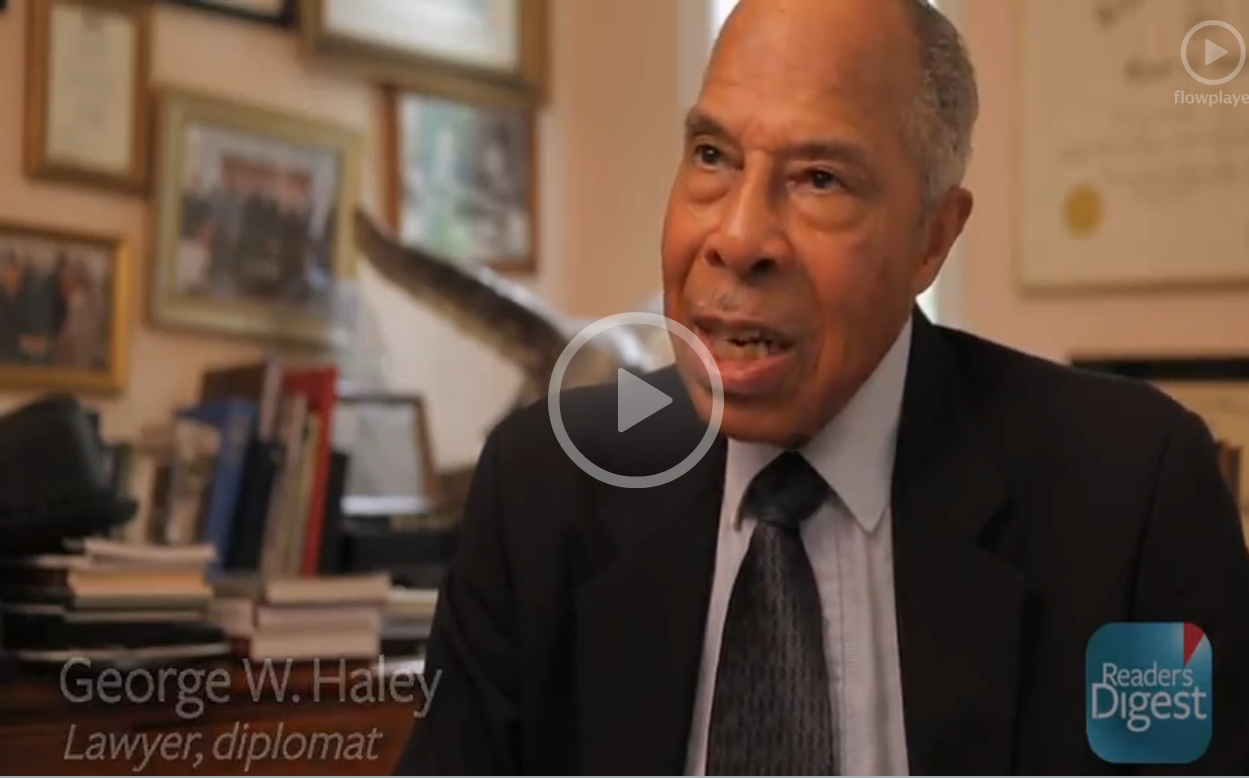 Last week, Alex Haley’s younger brother, Ambassador George Haley, died at the age of 89. George was the last living member of the immediate family—Alex’s mother Bertha died in 1931; his father, Simon, passed away in 1973; Alex in 1992; and youngest brother Julius died in 2010.

Amongst the three brothers, if Alex was seen as the black sheep and Julius was regarded as the quiet one, George was treated as the leader. Although he was five years younger than Alex, it was George who took on a patriarchal role later in life, especially following his father’s passing.

The second African-American graduate of the University of Arkansas Law School, George endured severe bigotry from students and faculty alike. Alex wrote about his brother’s experience in Reader’s Digest. George was married for 60 years—unlike his elder brother, who was married and divorced three times.

Settling in Kansas City, George was elected as Deputy City Attorney. From there, he also contributed to one of the most famous legal cases in U.S. history, Brown v. Board of Education of Topeka. Eventually, he was elected to the Kansas State Senate. Later, he served in several presidential administrations (Nixon, Carter, Reagan, Bush, Clinton and Bush) and ultimately appointed as an ambassador to, where else, The Gambia—Kunta Kinte’s native country. Click here to watch one of George Haley’s final speeches.

As I mentioned in a previous blog post, Roots is scheduled to be remade for television and will be aired next year on History, A&E Network, and Lifetime. Actor LeVar Burton, who
played Kunta Kinte in the 1977 mini-series on ABC, will be one of movie’s producers along with Mark Wolper, who’s father, David, was the producer of the original film. David Wolper’s role was critical in securing funding and garnering support from the ABC executive team, who had been reluctant about turning Alex Haley’s best-selling book into a television movie. Without David Wolper, Roots most likely would not have aired. Click here to read the full story.

New Alex Haley biography will be published in November 2015

A new biography about Alex Haley will be published in November. Written by Robert J.

Norrell, professor of History at the University of Tennessee, Knoxville, Alex Haley: And the Books that Changed a Nation is available for pre-order on Amazon and will be released on November 10. Norrell is the author of the critically acclaimed, Up from History: The Life of Booker T. Washington (2009), which was selected by the Library Journal as the “Best Book of 2009.”

A few of the friends I met during my semester abroad in Prague, who I still keep in contact with through Facebook, were very excited to read my recent post. It conjured up many wonderful, carefree memories. In fact, we’re thinking of having a 15-year reunion in 2017 to be held in Prague! Coincidentally, as I write this, my Czech friend and study abroad group’s unofficial tour guide, is graciously showing around my mother-in-law and her friend as they travel through Prague.

Finally, there was a recently published article in the St. Petersburg Tribune about the subject for my next book. The story featured Dr. Ralph Wimbish’s children, who are now in their sixties, and discussed their unique upbringing, raised by two politically active parents in the 1950s and 60s. Click here to read about the article.

To be notified of my upcoming book release, lectures, and other happenings, sign up for my email list.