BOOK REVIEW: Simon Winchester’s The Professor and the Madman 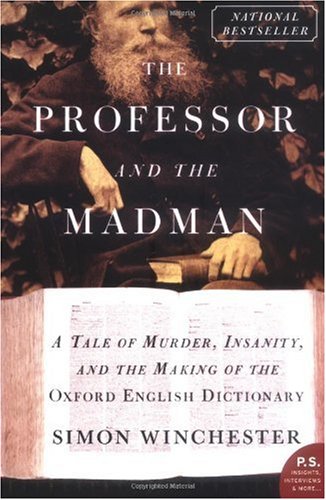 Although published more than a decade ago, I recently came across The Professor and the Madman: A Tale of Murder, Insanity, and the Making of the Oxford English Dictionary in our home library. My wife, who had read the book and turned me onto other books by Winchester, saw me scrutinizing the back page.

Within a week, which for me is incredibly fast, I plowed through the 242-page paperback.

The story of the making of the Oxford English Dictionary is not what you would expect–scores of bearded academics, pontificating to one another as each cups their tobacco pipe.

Instead, Winchester mesmerizes the reader as he focuses on the 19th century lives of two men (hence the title, the professor and the mad man) whose lives could not be more different. Having conducted his extensive research, Winchester weaves these stories seamlessly into a historical drama, akin to Erik Larson’s In the Garden of the Beast and Laura Hillenbrand’s Unbroken.

The professor, Sir James Murray, is a loving husband and father who was given the responsibility to create the official dictionary of the English language, a body of work that he began in his forties and would not be completed until shortly after his death at the age of 88. Once finished, it would be deemed the second most important contribution to the English language after the Bible.

The mad man is an American physician, Dr. W. C. Minor. A Civil War veteran with aristocratic New England roots, Minor suffered from PTSD after his service in America’s bloodiest conflict and soon after the war, while having a hard time readjusting to civilian life, fled to England.

In the ensuing years, Minor’s mental state got worse. After being found guilty of murder, he was sent to an insane asylum. It was at the hospital that he was introduced to Murray’s project. A literary man hoping to pass the boredom of his mundane routine at the asylum, Minor was intrigued and volunteered his services.

With an infinite amount of time on his hands and a knack for attention to detail, the doctor became indispensable to the project. It would be years before Murray and Minor would meet but, eventually, they would.

A wonderfully written story, the author once again proves—as he did in A Crack in the Edge of the World—that, in the end, truth is always stranger than fiction.